Sniper Ghost Warrior Contracts 2 marks the most challenging entry to the acclaimed series yet, introducing extreme long-range sniping with targets over 1000m away. 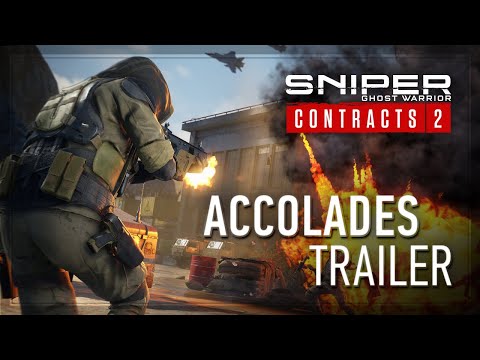 Featuring a dramatic single-player campaign set in modern day Middle East, experience high-pressure tactical combat, deep inside enemy territory. Take on the role of Raven, Contract Sniper Assassin, as he embarks on a new series of contracts in a lawless region of the Middle East, located along the Lebanese and Syrian borders. Tasked with a seemingly impossible task, your mission is to topple an insidious criminal syndicate and bring them to justice. Exclusive to PS5, introduce your enemies to an all-new level of pain with the Sniper Ghost Warrior Contracts 2 Elite Edition, which includes a free copy of the Crossbow Carnage DLC.

Compatible with three different types of ammo, including the spectacular explosive bolt, no self-respecting assassin is complete without it.

Light and nimble, this weapon is quick to aim and even quicker to fire.

Its a revolver but has dreams of being a shotgun, with the ability to shoot both bullets and buckshots at unsuspecting foes.

Because stripes never go out of fashion.

Dualsense adaptive triggers that give each weapon its own distinct feeling, Improved SSD loading times, Upgraded textures and visuals, Ability to play in either performance mode (60fps, 2K) or visual mode (30fps, 4k).

Series veterans are in for a challenge, as Sniper Ghost Warrior Contracts 2 demands a new level of skill, focus, and precision, with many targets now over a 1000m away – a first for the series.

Developed by the same studio behind the original game, Contracts 2 pushes new boundaries with its hyper-realistic sniping experience.

Equipped with all-new equipment, each highly replayable contract can be completed in a variety of ways. Replay the mission with a different approach to complete all objectives and collect maximum rewards.

Contracts 2 introduces new levels of fidelity, with optimized visuals, improved FPS, and an enhanced game engine, resulting in the best looking entry to the series yet. Pull off ultra realistic stealth kills, captured in viscerally graphic detail thanks to the cinematic bullet cam.