World War One expands to the mountains of the Italian Front – beautiful but deadly in equal measure. 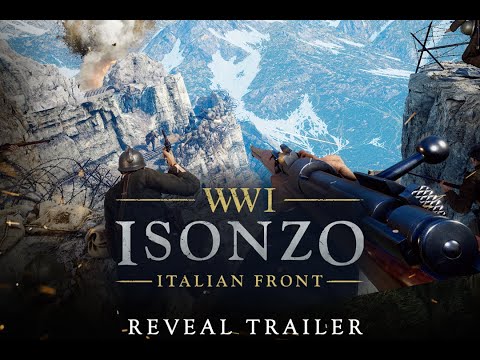 World War One expands to the mountains of the Italian Front – beautiful but deadly in equal measure. Inspired by the two year struggle for control of the Isonzo river valley and the Alps during World War One, Isonzo elevates the WW1 Games Series, figuratively and literally. Lead the charge across stunning Italian landscapes as you choose your path to victory – cut paths through barbed wire, flank your enemies by following mountain trails, or man a mortar to blast a way through. Shape a dynamic battlefield by laying sandbags and wire, placing ammo crates, deploying trench periscopes or sniper shields, and more. Take part in historical offensives from the Sixth Battle of the Isonzo to the Strafexpedition. Reflecting the course of the actual battles, as the attackers advance the fighting will shift through vastly different landscapes within a single offensive: from hillside fortresses to mountain trenches and fierce urban combat on city streets. Everything is recreated based on research and field trips, from sound effects and uniforms down to the houses, vineyards and trenches youll be fighting over. Youve never experienced WW1 action quite like this!

Assaulting mountain fortifications, battling through ruined towns, and fording rivers are just a few of the challenges youll face as you fight your way through numerous enemy positions

Choose your role and loadout carefully to survive this high-altitude combat – play a sniper to pick off the enemy engineers before they can cut your wire, use rifle grenades to clear enemy machine guns, and much more

Place your own wire, sandbags, trench periscopes, and more! Whether youre digging in or on the attack, shaping the battlefield to your advantage will be key to victory

Make every class your own by picking from a variety of historically class-appropriate uniforms, accessories, and headgear. As a finishing touch, you can even pick your mustache from several famous period-accurate styles!