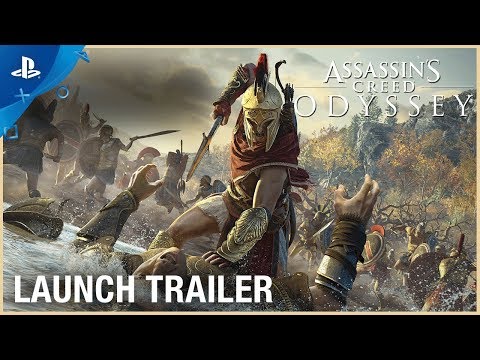 The battle of Thermopylai, 480 BC. King Leonidas I of Sparta and his army of 300 stop the advance of an invading Persian army that counts tens of thousands soldiers. In the end, he falls, but not before costing the Persians so dearly that their conquest for Greece fails on the very shore they landed. Two generations later, Alexios and Kassandra were born. Depending on player’s selection, one of them plays the protagonist while the other becomes an antagonist. But before they were shaped into mighty warriors, they were children, they were Spartan, and one of them was to be sacrificed to the gods at the behest of the Cult of Kosmos who works in the shadows yet controls the world through chaos. Many years later, the remaining sibling lives on the island of Kephallonia, while the other is presumed dead by being thrown from the mountain in the sacrificial process. The protagonist living in Kephallonia was rescued and raised by Markos, a shady character with a knack of making drachma and getting himself into trouble, but with a good heart. Being raised by such a person made the protagonist took a path of becoming a mercenary. Feeling ready, it was time to venture into the world and find the answer to many questions that troubled the protagonist from the childhood. Why did their father allow the sacrifice? Is the mother still alive? Who or what is the Cult of Kosmos and what are their plans? Thus, Alexios’ or Kassandra’s odyssey begins.

This is the the first time in the series where the player gets to choose the protagonist. In Syndicate player could switch between sibling protagonists, but here the entire story is shaped around the single selectable protagonist, Alexios or Kassandra. The game also has two main gameplay modes… one which helps the player by showing where to go next for main quests, and the exploration mode which forces the players to explore Ancient Greece on their own and find out where the next goal is on their own. Similar to previous games in the series, the player can move on foot, ride a horse, or commandeer a ship (or a smaller fishing boats that will break on open sea on big waves). Many RPG elements were taken directly from Origins so the player has various weapons and armor which can be replaced or upgraded by the blacksmith. Weapons and armors can also be engraved with special abilities. As with other RPGs, there is a leveling up system in this game, but the enemy levels up together with the player so while the player’s attack, defense and overall strength increases, the same happens to the enemies so player never becomes strong enough to more easily or more quickly take out some fortress or a pack of wolves head on. Weapons and armor too have a level number assigned, but each piece of equipment can be upgraded to player’s current level with enough money and resources. Money is earned by doing mercenary jobs, weather story quests or various tasks which constantly appear on the bulletin boards in towns and ports. Experience points are earned by defeating enemies, solving quests and opening new regions and areas on the map. Experience points are used to level up which in turn lets the player exchange skill points to upgrade existing or unlock new skills. After a while, additional upgrade system opens which lets the player use skill points to upgrade warrior, ranger, or assassin type of attacks. Spent skill points can be reset at any time and re-used for entirely new selection. While the player is a mercenary and he gets paid for various jobs and bounties, doing bad things in the open may create a bounty on player’s head which will make other mercenaries hunt the player. Bounty can be lifted by remaining out of sight for a while, by paying money for your crimes, or by killing those that put bounty on your head. The quests are split into odyssey quests which are quests tied to the main story, add-on quests which are related to DLCs, world & characters which are quests given by characters you met on your travel, and bounties & contracts which are acquired from various bulletin boards. By completing the main story quests, the game doesn’t pause or asks the player if they wish to continue exploring, it simply continues as if they were regular quests. End credits roll doesn’t kick in, though credits can be accessed via main menu. A photo mode is available and lets the player post a photo online which appears on the part of the map where it was taken. The same way, player can look at other cool photos taken and posted by other players. Entirely new in this game and further step toward role-playing game are selectable dialogues and topics to talk about. Even choices which can be used in dialogues without having to unlock such ability like in other RPGs, for example choosing the approach to get some answer… through intimidation or seduction. There are also many romances (although none really deeper than one-night stand) which can be followed through based on dialogue selection and actions done in a specific quest. But even though sex element is introduced, nothing more than flirting dialogues that lead to a kiss which then fades into black screen is shown.

While Ancient Greece has many island and is surrounded by sea, most of exploration will still be done on land. While on foot, the player can walk, run or sneak while crouching. Sneaking reduces the chance to be spotted, and if the player is in the bushes then unless the enemy soldier bumps into you, the player is invisible which is indicated by slightly highlighting the player character. There are many different weapons the player can wield, from swords and hammers to spears and tridents, each weapon has its own pros and cons, power and speed. Only two weapon types can be selected at the same time for a quick switch during combat. Close combat weapons are warrior weapons. For long ranged attacks the player uses bow and arrow. There are different types of arrows and different skill moves and powers can be assigned for both warrior and ranger style attacks. Assassin skills and assassin attacks are used only when the enemy is unaware of the player, meaning when you sneak up to or run to the enemy looking in the opposite direction. There is literally no limit to where the player can climb and after reaching certain level, jumping from skies won’t harm you either. World map is initially covered and it shows various locations, towns, fortresses, bandit camps, and other points of interest by entering new region. Synchronization points are still there and once reached they can be used for fast-travel, otherwise the horse really speeds up the travel as opposed to running, although in vicinity of towns even the horse won’t be fully galloping. To upgrade equipment or craft arrows and other things, resources are needed. They vary from tree branches to metal ore and are scattered around the land, re-spawning upon entering the same area, and same happens to cleared forts and soldier camps.

Sea Combat & Controls
There are small fishing boats which are fast and useful for reaching close islands or navigating across the shallow water with no big waves, and then there is the main ship, the Adrestia, that players can upgrade and uses to battle enemy ships and travel the open sea. The ship can be upgraded in appearance (both ship itself and the crew) as well as in strength. When fighting other vessels, archers fire at longer distance while javelins fire at closer. Additionally, ramming an enemy ship from the side causes massive damage and can sometime break the enemy ship in half. When damaged enough, the enemy ship can also be boarded and plundered. Most of weapons and armor can be sold and disassembled for parts, but epic equipment cannot. If it clutters the menu with many old epic pieces of armor or weapons, those can be stored in a chest on the player’s ship. Bulletin board with contracts and bounties can also be accessed on the ship. But sea combat and exploration isn’t limited to surface alone… the player can dive the entire sea and explore the underwater life just as well. While underwater, holding your breath leaves a short amount of time to dive leisurely, but there is a trident weapon which when equipped gives the player the ability to breathe underwater so exploring underwater ruins and fighting sharks can be done without having to worry about the remaining air in your lungs.

Air Combat & Controls
There isn’t really any type of combat that takes place in the air, but there is a controllable character that is non-stop in the air, namely Ikaros, the player’s faithful eagle. While in the open, the player can switch to Ikaros at any time and check the surrounding from high up in the air. Ikaros can tag enemy for the player which is the main purpose of this bird, although it can soar on its own and explore more distant areas. Synchronizing map points also adds a brief cut scene showing Ikaros circling around the checkpoint and giving the open view of the area. By level up the player character, as well as synchronizing more checkpoints, Ikaros too gains new abilities such as being able to see and mark targets further, come down and swoop nearby animals or even be called on to distract enemies.