Hello Neighbor 2 is the sequel to smash hit Hello Neighbor, where your sole priority is to sneak into your creepy Neighbor's house and figure out what he's hiding in the basement. 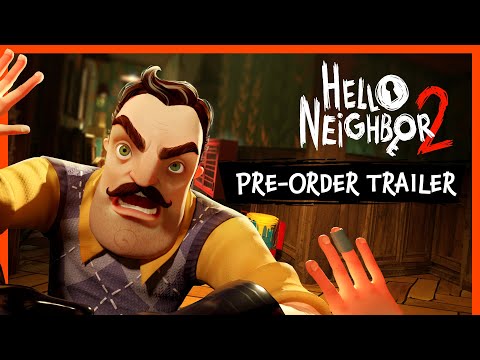 In part 2 we have gone even further, and as a journalist, it will be your job to investigate the murders and mysterious disappearances occurring in the seemingly quiet town of Raven Brooks. You will be the one looking to solve the Neighbor’s case because no one else dares to. In Hello Neighbor 2 you play against a complex opponent controlled by advanced AI that learns from you and all the other players! As time progresses and the Neighbor adapts to the players’ patterns, his own behavior will change and surprise you. Will you be the one to outsmart the Neighbor and find out what he's hiding?

Raven Brooks and all its mysteries are now yours to explore! Traverse the town, all of its houses and AI-driven inhabitants are now part of your playground

It feels like an investigative journalist simulator – sneak around and find out your neighbors' secrets. Why does this gentleman with a moustache go down to the amusement park every night?

Can you outsmart the AIs? Every character in Hello Neighbor 2 is powered by a neural network AI, learning from the players, doing everything in their power to protect their gated community and its secrets.

It’s up to you to uncover the dark secrets hidden in Raven Brooks!